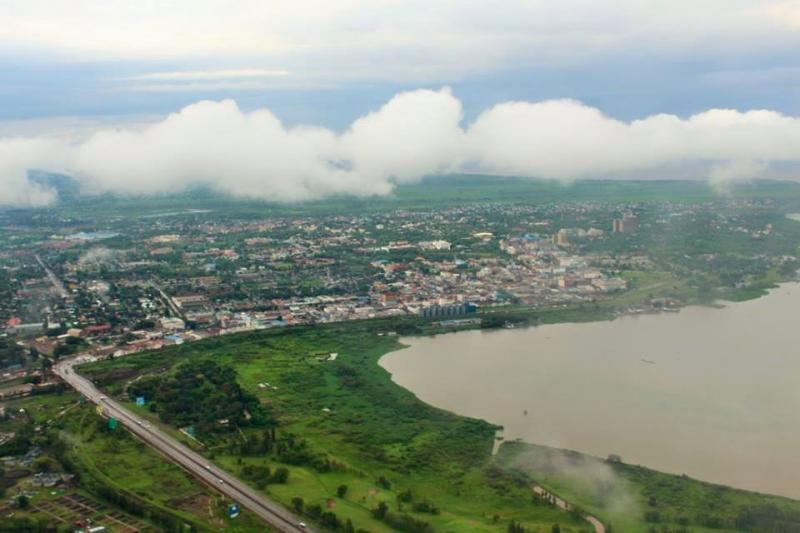 Situated on the shores of Lake Victoria, the port city of Kisumu in western Kenya faces many of the challenges confronting developing urban centres in Africa. Kisumu is Kenya’s third largest city. Its 600,000 population swells to over one million during the day with sixty per cent of the city’s residents living in ever-expanding slums or informal settlements. The combination of poverty and poor living conditions make them highly vulnerable to a range of man-made and natural hazards, including floods, fires, communicable diseases and environmental pollution.

Long praised for its work on disaster risk reduction, Kisumu has offered to be a training ground for other cities in Kenya and neighbouring countries. The offer was extended by Kisumu City Manager, Doris Ombara, during a “resilience tour” of the city and county carried out by the UN Special Representative of the Secretary-General for Disaster Risk Reduction, Mami Mizutori.

Ms. Mizutori praised the pioneering role that Kisumu has played in the Making Cities Sustainable and Resilient Initiative, a project co-led by the United Nations Office for Disaster Risk Reduction (UNDRR) with funding from the European Commission. The project aims to boost levels of disaster resilience in 20 cities worldwide.

Assistant City Manager, Celestine Collins, is the project’s focal point in Kisumu. She led a process that brought together over 100 participants from municipal departments and local organisations and communities, to develop Kisumu’s first disaster risk reduction (DRR) action plan. County Assembly leaders from across Kisumu participated in the process, bringing with them youth representatives from their constituencies.

‘Our priority was to bring local politicians on board from the beginning of the process. We wanted them to go back to their communities and consult with village elders and talk to people about the risks they faced and then bring the issues back to us’, explains Ms. Collins.

One of the main threats facing many communities is flooding. Kisumu is low-lying and the local black cotton soil prevents surface water run-off during the heavy seasonal rains. The build of sedimentation in local waterways also causes rivers to burst their banks.

‘Before, the mindset was about managing disasters. We would wait for the floods to come, people would move to relief centres and we would hand out blankets and maize. Now the emphasis is more on prevention’, says Ms. Collins.

Municipal funds were routinely spent on repairs to flood-damaged roads but involving communities in the consultation process has now led to more priority being given to improvements in drainage infrastructure which in turn is safeguarding local roads.

‘We have placed a lot of emphasis on sensitizing and engaging them in DRR activities. Involving young people in digging or clearing drainage channels gives both employment opportunities and a sense of responsibility. When you incentivize people and make them aware that a blocked storm drain can flood their community, they will make an effort to keep it clean,’ says Ms. Collins.

During her tour of the city, Ms. Mizutori commented on the remarkable level of civic participation and engagement on risk reduction evident in all her encounters with local people throughout the day. “Inclusion and all of society engagement is essential to reducing disaster risk in a meaningful way at the local level.”

The first stop was in a rural area east of Kisumu where locals gathered to talk about the benefits that a new bridge would bring during the rainy season about to get underway next month. In the past, floods in the area have prevented pregnant women reaching the maternity hospital, children from attending school, farmers and other traders bringing their produce to market.

In a ceremony on the bridge, retired school principal, Kevin Kooguya, said he felt particularly sorry for sugar cane farmers who could not bring their harvest to market during the rainy season with dire economic consequences for their families.

Back in the city, Ms. Mizutori, accompanied by her Africa head of office, Amjad Abbashar, visited the city dump which extended over ten acres before work got underway last year to move it to a managed site on a disused quarry where town engineers have prepared well to ensure it does not affect the water table.

For the last thirty years it has been an eyesore and a source of disease. Ms. Ombara said the successful effort to move the dump and transform it into a green public space required “courage and daring” - from the environmental impact study to negotiating with those who depended on it for a living through scavenging.

There is an impressive plan in place to engage citizens in the collection and recycling of their household waste. Other items on the municipality’s agenda include dredging tributaries of Lake Victoria before the rainy season and raising funds to replace asbestos sewerage pipes.

Investment will also made to build the capacity of Kisumu’s fire service which has insufficient numbers of trained personnel and lacks vehicles and equipment. Plans are also in place to upgrade Kisumu’s hospital facilities by improving maternity facilities and increasing bed capacity to reduce patient waiting times.

Read the original story here
Share this
Also featured on